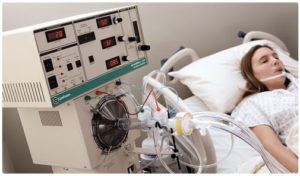 Our client suffered septic shock and nearly died two weeks after her baby was delivered by C-section following a prolonged labor, because the OB/GYN failed to use antibiotics prior to surgery. She was discharged from the hospital a few days after the C-section with a slight fever and red incision, but her doctor assured her she was doing well. A week after she was discharged from the hospital our client became ill, but the OB/GYN failed to realize there was a serious infection brewing deep inside of her. Instead, the defendant doctor prescribed a general antibiotic for what he believed was a “superficial wound infection,” because our client’s surgical wound was red and oozing.

Before antibiotics were invented, women with prolonged labor often died during childbirth. When a pregnant woman’s amniotic sac ruptures (“breaking water”), infection can occur because there is no longer any protective barrier between the outside of the mother’s body and the inside of the uterus where the placenta attaches, allowing bacteria to invade the uterine muscle tissue. This condition is called “endometritis,” but in the “old days” (before antibiotics were invented), this condition was known as “childbed fever.” Bacteria can also invade the amniotic sac and lining, known as “amnionitis” or “chorioamnionitis.” After antibiotics were invented, women rarely died from infection due to prolonged labor and ruptured membranes.

The standard of care for OB/GYN physicians requires prophylactic (preventative) antibiotics for women with prolonged labor and ruptured membranes, especially when a C-section is performed. When the patient’s abdomen and uterus are surgically opened, infected amniotic fluid can splash inside the abdomen, resulting in multiple “pus pockets” and serious widespread infection.

Approximately 2 weeks after the C-section our client suffered septic shock and nearly died. She underwent 7 surgeries to remove large “pus pockets” that had accumulated in her abdomen, and spent nearly 2 months in the ICU. One of the surgeries included a colostomy because her bowels stopped working, which required her to use a colostomy bag for several months. Because of her extended illness and multiple surgeries, our client was unable to hold her baby for the first time until he was nearly one year old. When our client finally healed from all the surgeries, her abdomen was badly scarred and mutilated.

The defendant OB/GYN doctor alleged the standard of care did not require prophylactic antibiotics and that the patient’s septic shock was allegedly due to c. difficile colitis from the general antibiotic prescribed for the misdiagnosed “superficial wound infection” a week after the surgery.

We offered to settle our client’s case without trial for $1,250,000, but the defendant doctor and his insurance company refused to pay more than $50,000. After a 5-week trial, the jury agreed with our theory of the case and awarded $3,000,000 to our client.

Share This Page:
Medical
Malpractice Personal
Injury
Over 25 Years of Courtroom Experience
Multi-Million Dollar Settlements & Recoveries
No Costs or Fees Unless We Win Your Case